Forecourt separators and petrol interceptors are an essential infrastructure requirement for all forecourts so as to ensure compliance with both health, safety and environmental legislation.

Fuels and oils such as petroleum and diesel when mixed with water will float to the top when contained in a tank. Car parks, petrol forecourts and motorways are typical places where leaking engine oil and fuel collect over time. When it rains, the run-off water becomes contaminated and can enter drains and man-holes causing serious pollution. Petrol interceptors or oil separators help to solve this problem. The contaminated water enters the interceptor typically after flowing off the road, car park or forecourt and enters a channel before being deposited into the first tank inside the interceptor. The first tank builds up a layer of an oily hydrocarbon as well as other scum. 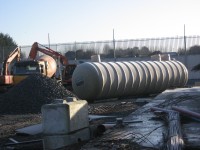 Contact Adare Biocare now at 061-395819 for more details on our range of Petrol Interceptors and Oil Separators.